On 12 October 2019 a series of Bach organ concerts performed by leading Russian organist Konstantin Volostnov began at the Museum of Music. This is the third project of the musician on the Prokofiev stage. It embraces all organ compositions of Johann Sebastian Bach and is considered to be the most successful organ series of the Museum of Music. 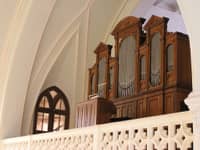 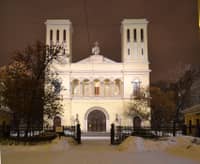 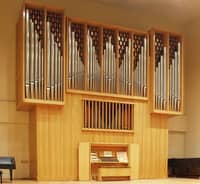 in the Great Hall of the Conservatory

"Konstantin Volostnov has demonstrated a remarkable school of performance on original keyboard instruments, as well as a subtle understanding of styles of music by 17th and 18th century composers."

The Moscow organist Konstantin Volostnov was born in Moscow in 1979. He began studying organ music in Maria Potashnikova's class in Sergei Prokofiev Music School. From 1994 to 1999 he studied in the Academic Music College of The Moscow Tchaikovsky Conservatory (piano and organ classes of Alexei Shmitov).

In 2004 Konstantin Volostnov graduated from The Moscow Tchaikovsky Conservatory where he studied with Professor Alexei Parshin (organ), Yuri Martynov (piano), and Professor Alexei Lyubimov (chamber ensemble). In 2007 Konstantin Volostnov got a diploma of Staatliche Hochschule fur M&DK in Stuttgart where he took lessons from professor, doc. Ludger Lohmann and in the same year Konstantin finished post-graduate course of The Moscow Tchaikovsky Conservatory (organ class of professor Natalia Gureeva). In October 2013 Konstantin made his last examination: for the first time in the history of Stuttgart Musikhochschule he's got a Diploma "with distinction" as postgraduate student of organ class.

Konstantin Volostnov is a winner of the First Prize at the E.F.Walcker-prize in Schramberg (Germany, 2008) and First Prize at A.-F.Goedicke competition in Moscow (2008). In 2009 he became a winner (First prize) at St.Albans organ competition (UK) where he also got Peter Hurford prize (for the best performance of Bach’s work), Audience prize, and the prize for the best performance of Sacrificium by John Casken.

Konstantin is a regular participant of the contemporary music festival "Moscow Autumn" (2001-2015) and the Moscow International Organ Festival (2001-2011).

At the organ of Moscow Catholic Cathedral

"Volostnov’s manner of performance is characterized by artistry and temperament, which allows us to expect from his programs an effect of presence not only at a solemn mass, but in organ competitions."

Send us a message